It’s been two weeks since we got you your weekly “Best Bets”, but we’re excited to be back for this special edition, focusing on the second most popular Super Bowl prop bet: Who will win the MVP. Given the unique nature of this piece, we are going to approach this a bit different.

To start, like with any play we will dive into, we need to get some historical/macro context for a starting point:

From a historical context there are two main angles to consider when making a selection: Winning Team and Position.

The winning team angle is pretty straight forward: DON’T bet on the losing team. We can cite Chuck Howley all we want, it’s just not going to happen as it hasn’t since 1971 (and only one time ever at that).

As for position, for sharp bettors the “MVP Bet” has mainly been a de facto/derivative value pick for “who will win the game/and who is their QB”. Hence, the 4.5 point favorite Rams QB, Matt Stafford is priced accordingly at the lowest odds of +135.

*Special note: if you want to bet the Rams winning the Super Bowl, instead of taking 50 cents on the dollar (-200 odds), why not bet Matt Stafford to win the MVP at +135.

As for position, Here is how every year’s MVP has averaged out:

As you can see, QBs dominate this space. As a general set of rules: If you MUST go non-QB offense, look for a likely 2+ TD scorer. If you want to play the wildcard/defensive route try to find someone that will create a turnover (good luck, as longtime readers know that predicting turnovers is a fool’s errand).

With that said, we have compiled our best bets for Super Bowl MVP, sorted by our ACTUAL best bet (defined by most profitable, which = best *EV, or estimated value of the pick), down to “let’s have some fun” type bets, that we still see to have some value.

We’ve mostly alluded to the reasoning above, but honestly,  we are in this business to make money. So, we have a semi-interesting play for you.

And although other opportunities may seem more appealing (with their +1000s, etc), the MVP is very likely to goto the winning QB. As such, why not bet both players, as even the lower payout has enough juice to make it a profitable angle?

Yes, there is a risk that a NON-QB wins the MVP, but a very small one. And better yet, as alluded to earlier, I highly recommend this derivative as a bet instead of a straight-up play. That is, whether you are backing the Rams or the Bengals, I highly recommend, instead, laying money on the respective QBs to win the MVP.

There really needs no other advanced analytics, etc to cite on this, just the basic premiss that we pretty much know that Super Bowl MVP in modern football goes to the winning QB. So why not make a couple bucks off that?

I know this is starting to come off a bit “chalky”, but we think there is a good reason for this play. Particularly, if you are not satisfied with the QB MVP payouts.

For starters, to break this down into a mathematical play, given the 6:1 odds, we only need about a 14% chance of this happening to be a profitable EV. That’s pretty low, especially given how critical Cooper Kupp is to the offense. And, as you could reason, the only way a WR wins the award (since his production is tied to the MVP-LIKELY QB’s production) is to stand out among his peers relative to the QB, just by sheer number we can see this is possible with Kupp’s volume. As we mentioned earlier, for a non-QB to become SB MVP we need scores, and to get scores we need touches. So why not go with the player that leads the NFL in team share of targets?

Additionally, the Bengals have not shown a proclivity to stop slot WRs, where Kupp runs 73% of his routes. As per SIS The Bengals have struggled to defend slot receivers all season, allowing a 70.2% completion rate (ranked 25th) and 8.6 yards per target (ranked 27th), according to Sports Info Solutions.

“Knowing the Bengals’ tendency to bring standard pressure 一 more on that in the discussion on Matthew Stafford’s props 一 we could also see an elevated target share for Kupp in this game.

Stafford has been blitzed on less than 20% of his dropbacks in nine games this year 一 a reasonable expectation for the Bengals’ blitz rate in the Super Bowl. In those nine contests, Kupp averaged 8.5 receptions for 108.6 yards, topping 100 yards five times.”

Add it all up and if you want a non-QB MVP play it simply has to be Cooper Kupp.

This is our LONGSHOT pick. In other words this is the bet you don’t wager legit money on, instead “pizza money”, etc. Better yet, this is the bet you play when you have only 5 bucks left in your account and are hoping for a miracle. By EV, we only need a 2-3% chance of this hitting to be profitable in the “long run”. Yet, there are a few things in Miller’s favor here.

For starters, there are some subjective “feel good” vibes behind this. That is, the MVP Vote is still a subjective vote, and the voters like this as a semi-feel good story. Additionally, Von has won an MVP before, which shouldn’t mean much predictively, yet it can’t hurt, right?

But most importantly, look at his matchup for this game (thanks to our friends at PFF): 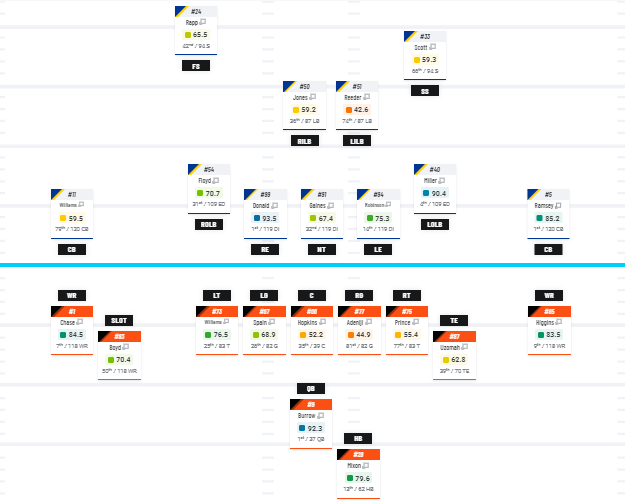 As you can see above, he should not have much of an issue creating pressure. Zooming in a notch, this is magnified when you look at Miller’s Pass Rushing Grade (81.8) vs Isaiah Prince’s Pass Pro Grade (51.4).

That’s 4th best in the league in generating pressure as an individual vs. the set we are all expecting to see a lot from the Bengals.

If you’re looking for a “lottery ticket” MVP play, go with Von Miller