Strong week for us to kick off playoff betting, crushing the Derek Carr UNDER 35.5 yards longest completion prop (26 was his long) and the OVER 43 points for the Patriots/Bills game (64, almost winning by 50% more points). So we’re hoping to capitalize on that momentum in this week’s picks.

This game comes in as the lowest OVERALL point total of the four games this weekend, at 46, but our reasoning for this play has to do with first quarter splits. Specifically, DVOA splits between each offense/defense within the first quarter, vs the rest of the game.

*NOTE: During editing, we noticed this dropped A LOT, which means we’re on the right track, but have to say we would NOT recommend this below 8.

Last week I blurted something out, that I realize has been a sort of an inadvertent “Commandment” of my betting: I NEVER bet against Pat Mahomes, Aaron Rogers or Tom Brady (at least straight-up). It’s just so hard for me ever picturing them losing, nor do I ever want to be watching my team with a lead late in the game while one of these cats has the ball. So, I’ll have to admit that sentiment is a big part of this play. However, there is enough objectively to back this up as well.

Let’s start with the basics. Thanks to our friends at PFF, look at the two team’s unit grades.

Same look, but ranked (of all teams not just remaining playoff contenders).

The point is, these two teams are VERY equal, and despite recent research showing how much home field advantage has diminished the past two years (2020 with good reason), there are still a few places that have exceptional home field advantages (Kansas City being one of them). Which, SHOULD skew the outcome of this game.

Better yet, we have Pat Mahomes, at home giving only 1.5 points (now), vs an equitable foe. That’s where this play starts, however we think the turning point in this matchup will be how well Josh Allen performs when blitzed (not necessarily when pressured/not).

You see, at least in 2021, Bills QB Josh Allen has had one of the largest discrepancies between performance when rushed by 4 or less vs. being rushed by 5+. According to SIS datahub, Allen has a 51.7% success rate when NOT blitzed and 36.3% rate WHEN BLITZED (note: data taken only from games within 16 points, only downs 1-3 to tease out noise). This is one of the highest discrepancies in the league and knowing the Chiefs blitz at the 8th highest rate in the league, could be the difference in the game.

More importantly, I believe the Chiefs have a sharp enough staff to know this, and even see how their blitz vs non blitz scheme affected Allen in their earlier matchup this season (despite losing that game). Take a look at Allen’s splits when blitzed vs. NOT blitzed vs. the Chiefs earlier this year:

The Chiefs almost cut Allen’s success rate to one third when blitzing. They know this, and will follow suit when an opposing QB not only has a clear split to exploit, but demonstrated it when reviewing the film from earlier this season.

Special note: What I am planning to do is bet the Chiefs straight-up, then after the first drive for the Bills note how often the Chiefs send the blitz (at least 5 rushers). If you see it more than twice, let it ride, if NOT, hedge out and put some action on the Bills.

The genesis of our plays rarely comes from this place, but we will simply come out and say it:

We don’t think the Titans are THAT good. Football Outsiders actually showed this empirically a couple weeks back when they claimed the Titans were the worst #1 Seed ever recorded. The Bengals being ranked at #17 and Titans #20 for the record.

And from the jump, we will concede much of this market valuation is riding on the return of star RB Derrick Henry, who frankly does objectively help the Titans (.18 EPA/Play BETTER when on the field in 2021 according to SIS), yet I feel the market is making two mistakes:

1. Over-hyping an average team, playing at a homefield without much of an advantage

Maybe I am hanging my hat too much on “analytics”, and specifically the “RBs don’t matter” soundbite, but this seems like a matchup that if I didn’t know any better I would have pegged as Bengals being 1-3 point favorites. Yes the Titans may have some success on the ground, but I can’t see the Titans DBs, particularly on the outside, matching up with an ELITE WR Group: 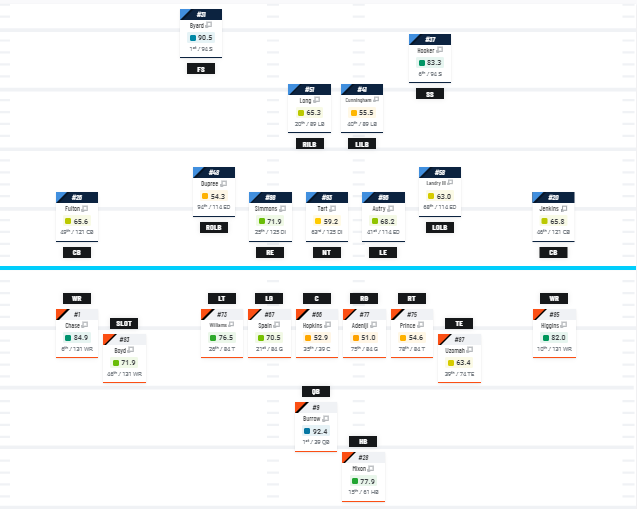 Photo thanks to our friends at PFF. Because of all this, I will stubbornly side with the objectively better team, getting points, that only needs a 39.1% chance of hitting to be a positive EV bet.