Here we are, the end of a profitable season. Yet all I can think of is: What a frustrating Week 17. We pushed on our Under/Over play, and missed our first bet by half of a point. Or as we are calling it, .6 points from a winning week. Anyway, we move on, focusing on finishing strong.

Let’s start with the basics: beyond having a veteran QB, at home (big advantage for THIS QB), in a dome getting points, which happen to be moving in the right direction as it opened at -3.5, there is an additional strong angle we really like here.

Assuming TE Kyle Pitts is out this weekend, we noticed a very interesting trend in how the Falcons alter their offensive attack when he’s off the field. Based on the SIS ON/OFF Report, take a look at how the Falcons tactically differ their approach during the 102 plays (of 592 total) Pitts has been on the sideline this season.

The team more than doubles their play-action rate (not to mention 2.5x-ed their deep throw rate). This is key when you take into account Matt Ryan’s QB Splits (see pic, thanks to PFF below): 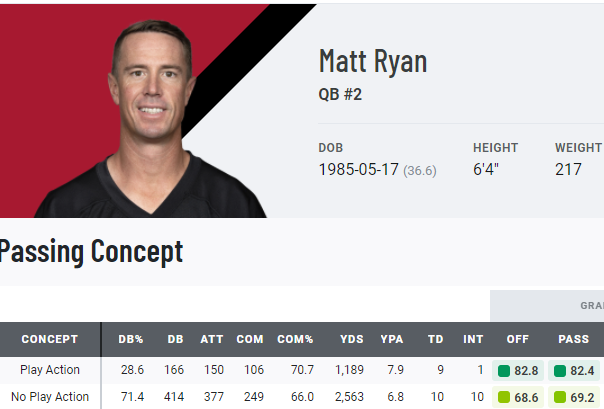 As you see above according to PFF Matt Ryan only charts at a 68.6 grade without play-action, yet 82.8 with play-action (we noted the rate overall in 2021 thanks to Arthur Smith detailed a few weeks back). Hence, already we have a solid angle knowing Ryan will likely be throwing MORE of the passes he is BETTER at throwing.

Beyond this, knowing the Falcons are likely to deploy more play-action, we thought we would take a look at where the Saints rank as a pass defense specifically against play-action (see pic below):

You’ll notice that’s 3rd worst in the league by EPA Saved per play, per SIS vs play-action passes. And what makes that split even more eye-opening is how well the Saints pass defense has performed vs NON play-action passes:

As you see above, that’s a pass defense, as clear as day, buoyed by NON-play-action passes. So what we have is a clear achilles heel on a defense, that one team is very likely to exploit based on historical, tactical tendencies. We feel this is a solid play, with a few derivatives that may have value (keep reading).

*Lastly, one of our favorite indicators as you’ll remember: Although 73% of the tickets (on the Moneyline)are with the Saints, yet 69% of the CASH is on the Falcons! NOTE: This means sharp money is likely ON OUR SIDE!

Best Bet #2: Olamide Zaccheaus OVER Longest Reception (likely in around 18, has not been released as of publish date)

We don’t like to piggyback in this segment, but we believe the above play has too much strength not to pass up an obvious derivative play off what we believe to be a banner day for the Falcons and their passing attack.

In addition to the Falcons using more play-action when Pitts is down, they also stretch the field quite a bit more without him (see data below thanks to SIS):

That’s a 2.5x increase in deep passing rate for the Falcons. Meaning we should get a solid amount of shot plays (possibly coupled with play-action). Now, that we know the Falcons are likely to throw deep more, likely off play-action, let’s take a look at the ON/OFF field difference of Pitts attendance as it relates to a particular Falcons WR: Olamide Zaccheaus:

As you can see, beyond being far more productive by advanced measures, we see a staunch increase in his Yards/Target by almost a third for Zaccheaus. Yet, what really makes this an interesting play is the area of the field. Let’s dive into some relevant, specific splits. According to Football Outsiders DVOA split by the areas of the field covered, despite the Saints having a top 5 pass defense, they have performed far worse on the right side of the ball (particularly the deep right). See below:

Normally, I would ignore such uber-specific datapoints. However, it does match up well in the “inverse”. Take a look at Matt Ryan’s splits “Pass by Field Zone” splits (especially deep right) thanks to PFF: 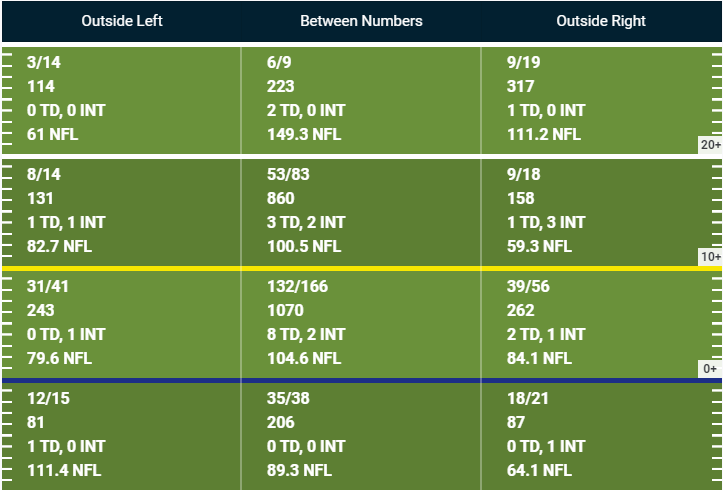 See how Ryan has been relatively stronger on the right side, especially with the deep ball. This feels like this play fits like a glove.

Now, bringing it altogether, according to PFF snaps by position, Zaccheuas is the only outside WR on the team to have more than more than 50% of his snaps on one side: 144 as an OLWR (Outside Left Wide Receiver), and 200 as an ORWR. This all leads us to believe he will get a lion’s share of the expected shot plays, especially on the deep right side.

Again, we may a taken a step too far in the weeds, and may be playing with the “specificity vs predictiveness fire” here, but since the core aspect of this play is solid:


1. Falcons will use play-action passing more
2. The Saints are very bad at defending play-action

So, let’s find the WR most likely to benefit most from this edge (relative to what the market knows). And after digging, we feel strong about the Zaccheaus play, both in longest reception and possibly yards. Let’s just say, we’re expecting a repeat of this, but with play-action and on the right side.

BONUS BET: Take the OVER on Russell Gage receptions (4.5 likely, although the actual number has not been published yet)

Along these first two narratives, take a look at the target share split changes when Pitts is out of the game:

Note, Gage sees a 50% higher target share with Pitts out of the game. And given all the ancillary circumstances noted above, we think he could be a strong play (and sneaky DFS play, along with Zaccheuas, if that’s your thing), particularly when it comes to his receptions numbers.

Bet: Olamide Zaccheaus OVER Longest Reception (likely in around 18)

This play has multiple variables in its favor. Admittedly, we don’t like the number and would prefer something closer to UNDER 20, but we still feel there is value.

Let’s start with the macro. According to PFF’s grading system, the 49ers come in with a very poor “Net OFF v DEF” grading score:

Yes, the 49ers have the 5th highest offensive grade, but the Ram’s possesse the #1 defense, that is 4.9 graded points higher than the second best defense (Saints). To put that in perspective, it’s more than the difference between the #2 defense (at 80.9) and the number #4 defense (Browns at 76.3). So, we are already working with a home defense, that is considerably the best defense in the league by a wide margin.

Second, Trent Williams MAY not be playing this week. And even if he is, likely won’t be at 100%. This is uber-significant, as he is rated the #1 player by wins-against-replacement by PFF. And if he doesn’t suit up, Aaron Donald/Leonard Floyd on the left side (strong side?, apologies,I just had to) will be feasting vs. Jaylon Moore and his 56.1 Pass Blocking Grade. And this is not to mention their starting QB is still dealing with a thumb injury, but sounds like he is going to start, despite saying this regarding his injury yesterday:

“It hurts. I don’t know how else to describe it,” Garoppolo said. “It feels like the web in your hand is kind of tearing a little bit. Yeah, that’s probably the best way I could describe it, but yeah it’s all good.”

This tells us, best case scenario, if he plays, the 49ers will either try to lean on the run game and/or limit high velocity throws from their QB, limiting scoring potential.

Third, as we mentioned above, we feel the Falcons have a strong chance of beating the Saints straight-up. And if this is the case, particularly at halftime, when the 49ers will undoubtedly be checking out the scoreboard, it’s possible they lose some motivation, as they clinch the playoffs regardless of THIS game, if the Saints lose.

*Subjectively, I think it’s also important to note that Sean McVay is a very good coach (especially in this division, where he is 20-10), and despite the fact he hasn’t beaten the 49ers since 2018, he is 5-2 in games where he’s playing a team that previously beat him in the season.

All of this adds up to have us believe this is a strong UNDER play, but we fear the Rams stomping on their offense, that we lean instead to the 49ers offense side of things.