Another winning week, going 2-1 in Week 14. Despite all the line movement, covid issues and coach changes that typically lend to more uncertainty, we still have 3 picks we like this week. Let’s jump right into this week’s picks.

We like this play because it “checks a lot of boxes”.

This play starts with one of our favorite “checks”: Heavy Cash siding, inverse to the Market siding. What I mean by this, is one of the best tells of “Sharks” or “Sharp Money” being on one side, is when there is a strong disconnect between the total betting slips bought for one side, and the total monies invested. Obviously sharp bettors wager higher amounts than your average joe, so it’s a strong indication of sharp picks (and the steam you’d rather chase than fade). Take a look at the UNDER/OVER betting breakdown for this game:

This is always a good place to start: the public is backing one side, yet the big money is backing another. When in doubt, be on the side of sharps.

Second, you’re already getting some value in this play as the number has actually moved UP over the week from 43.5 earlier.

Third, they are forecasting light snow for the game in Buffalo this weekend. Now, this is not ALWAYS the case, but all other things equal, it’s usually a fair situation to assume this may slow down score pacing between teams.

Finally, and really the place our model starts: This matchup has the lowest combined net PFF grades ((OFF1 grade – DEF2 grade) – (OFF2 grade – DEF1 grade)) between offense and defense in week 15:

*Thanks to PFF for the data

This all adds up to lead us to heavily favor the under in this matchup.

This game and its wild spread movement has been the talk of the week in the sports betting community, and (likely settling at) now sitting at +3.5 for a team that was originally -9 in some books, it’s time we say enough.

Let’s start with the elephant in the room: the reason for the massive line swing is that Covid has decimated the Browns, including key positions like QB, and Baker Mayfield. And I believe this is where most of the movement is coming from. But let me ask you: is the 2021 Week 15 Baker Mayfield, really that much better than Nick Mullens? By SIS On/Off Report, that measures the change in EPA/play when a player is NOT on the field, the difference between Mayfield and the backup this season has been essentially 0 (coming in exactly at .01). The backup QB has even performed better than Mayfield in some key areas, notably accuracy, take a look at the change in QB metrics (thanks again to SIS): 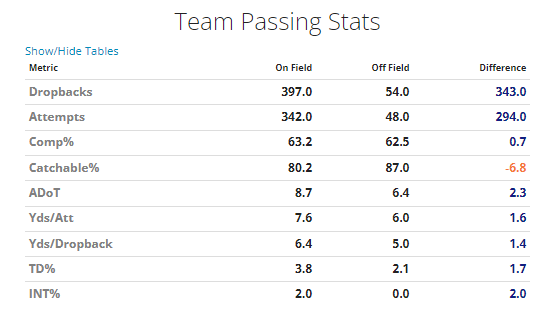 That’s almost a 10% better rate of catchable passes. Not only could the other QB be at least “as good” as Baker, but looking at the splits more in depth, it seems the Browns tend to take a more conservative approach, and lean on their powerful run game to neutralize defenses.

The second reason we like this play is how bad Derek Carr has been in cold weather (dating back to college). Yes, he did “slay this dragon last season”, but it’s been widely reported that his overall play drops in cold weather. And with initial reports forecasting weather in the 40s in the friendly confines of Cleveland, it’s hard to see Carr producing at his normal average-to-above-average-QB self.

Lastly, for a team that should be at least a touchdown favorite in this home matchup (sans Covid), yet are sitting at +3.5 (across a key number), the Browns roster is very deep. Take a look at what the starting lineups look like, thanks to our friends at PFF: 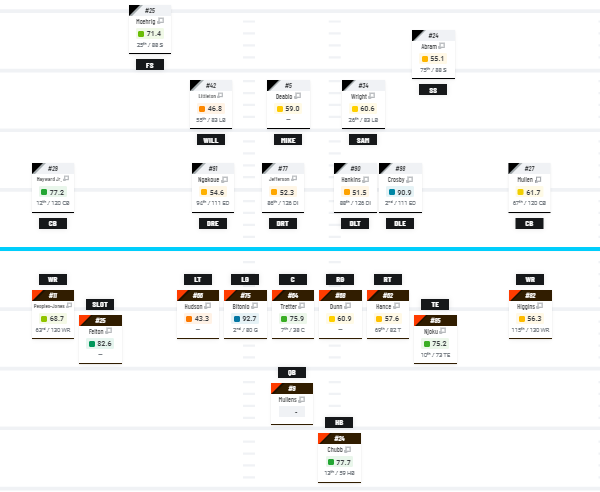 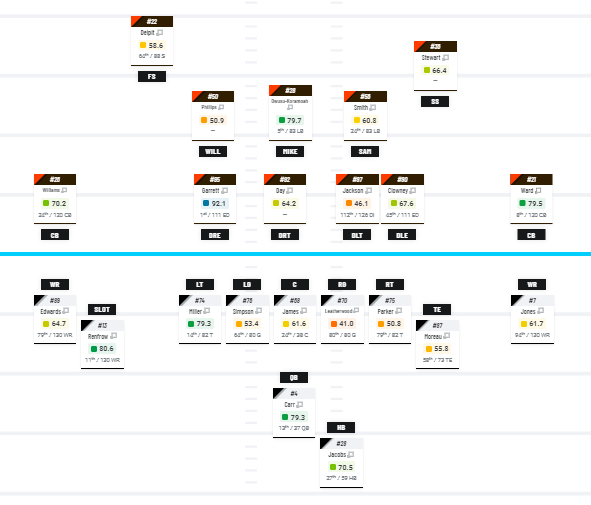 That doesn’t look like much of a fall, instead more like a deep team that still is at home, is actually fighting for the playoffs, and getting more than a field goal. Just on that principal alone, we have to back the Browns.

There are two parts to this play.

First, it’s us putting our trust in PFF: Football Outsiders and Pro Football Focus have very different opinions of the Bengals season-long performance thus far. Football Outsiders has the Bengals coming in at a “middle-of-the-road” 18th ranking, whereas PFF has the team as the 6th best in the league! For two trusted analytics sources, you rarely see this kind of discrepancy in performance metrics.

Second, we really like the comparative QB matchup here, and wish that a decent QB v QB yardage prop was available, but like the game bet anyway because:

To put it succinctly: Joe Burrow’s ability vs. the Blitz (5th best according to SIS), and how much the Broncos send a blitz (9th most in NFL) vs. Teddy Bridewaters ability when NOT blitzed (11% success rate points worse), and how LITTLE the Bengals send the blitz, together has us leaning in the Bengals favor (i.e. 2 predictive independent QB Matchup stats that both point in one team’s favor).

This is exactly the type of comparative datapoint we look for when identifying upset opportunities. And given we would only need 43.5% or so chance to make this a even EV bet, tells our model this is a play opportunity.