This is our favorite play: a Myriad of reasons and models agreeing with each other.

Right off the bat, according to PFF the Rams have performed FAR better than we would think, and the Cardinals far worse:

That makes the Rams the #1 rated PFF graded team, and the Cardinals #16. In fairness, by Football Outsiders’ DVOA they are neck and neck at 5th and 6th.

Secondly, although I am not a big fan of the typical betting trends, there are just too many (in one direction to ignore). As Mike Mains pointed out in his weekly email this week:

That combo adds up to a strong play.

This play is coming down to two elements.

For starters, the teams are not that far apart. According to Football Outsiders, the teams are only 1 spot apart in the rankings. And from a matchup standpoint, the Bills come in with a strong coaching advantage (pic by EDJ Sports): 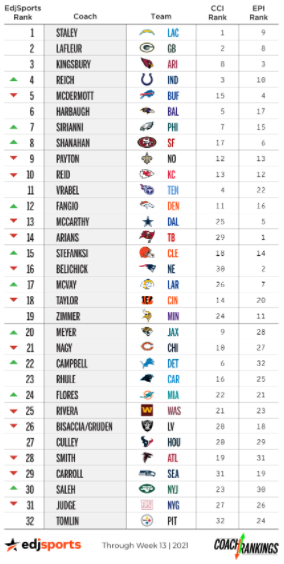 But this play really comes down to the fact that Ron Rivera and Seth McDermott were on the same staff in Carolina and remain close to this day. They clearly talk as both coaches have had success vs teams that had already played the other coach’s team previously in the year.

This is especially true when Rivera’s team not only played the Bucs earlier this season, but beat them soundly as a large underdog. You know McDermott has been on the phone with his old friend on what to do to beat the Bucs.
Bet : Buffalo Bills +3.5 OVER Tampa Bay Buccaneers

The Detroit Lions finally got off the schneid last week, with a roller coaster win over the Vikings. Yet still holding the worst record in the NFL, Football Outsiders projects the Lions have a 49.4% chance to get the first overall pick in the 2022 NFL Draft. As for Denver, their playoff hopes are still alive, but took a significant hit last week (dropping 11% points) and sit at 18%.

The Lions did finally win A game last week, but remain a dumpster fire. Any romanticizing of “the underdogs that fight hard for their coach” has worn off, and are simply a team that has no incentive to win, and every incentive to continue to lose.

Teams that win their first game this late in the season, especially with a first time coach, go 0-4/1-3 ATS the following week. In other words, you can expect a bit of a dip in motivation the week after.

Combine 2 strong motivational factors (nothing to play for/lots to play for with coming off “big” win) with a strong home field advantage and basic performance metrics, all adds up to this being a solid play.