After starting the season off hot, we have had two consecutive poor showings. We feel confident in our models and interpretations this week, and lean on our overall success in hopes of bringing you profits this weekend. With that, let’s get into it.

The line has not been set yet, but we feel confident in this one upto 2, and even 2.5 based on your appetite for risk. The play boils down to a couple of strong variables we are seeing in the “matchup splits”.

There already is a “plus matchup here” as the Panthers come in with the 16th ranked pass rush vs. the 22nd ranked pass pro (Falcons), according to PFF.  Taking a peek at it visually for a second, thanks to our friends at PFF (grades included in the graphic) here’s how the matchup shape up: 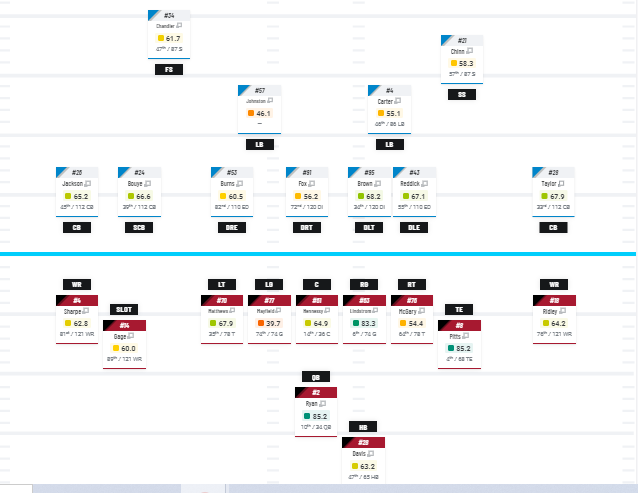 Nothing jarring really jumps out, yet when you dive in and see the NET pass pro advantages, especially on the interior, you start to see some issues for the Falcons Pass Pro.

This is ignoring a “par” matchup between the Panthers best rusher in Brian Burns vs. the Falcons best protector, Jake Matthews. It’s also not including any help the Center, Matt Hennessy, may (or may not) provide on the interior. And that’s the key here. When filtering out non-relevant variables, the Panthers have fared marginally better in terms of “Points Saved” on interior pass rushing than on the outside according to the SIS Datahub. More importantly, the Falcons flaunt an NFL 4th rated Pass Blown Block rate on the outside of 2.8%, yet Pass Blown Block rate of 3.8% on the inside, 31st in the league. Interior pressure is the key play here.

Finally, to top this off, Matt Ryan sits at 7th WORST (NET) QB when blitzed vs. not blitzed according to SIS. He actually averages .15 EPA per play LESS when blitzed. Given that Carolina blitzes QBs at the second highest rate in the NFL, it’s fair to predict Ryan will be pressured more than usual.

You can read more about this matchup in depth in my weekly picks section, but this play boils down to a situational betting circumstance. Summed up:

Putting it altogether, when situations like this arise, it’s typically best to leverage derivative markets that may be “slower” to react to your prediction.

The two teams matchup well, with both offenses seeing significant advantages vs their opposing defense, by PFF Ratings. As a matter a fact, this game’s +42.8 Net Offense vs Defense ratings, is the highest of the week, hinting towards an over bet (where 61% of the cash is, even though 88% of the total tickets are on the Under, meaning the sharps are going with the over). The one area that’s most interesting though is between the Patriots O-Line and the Chargers Pass Rush. The Chargers have a +10 Net Pass Rush Grade for the contest, and this advantage is only increased by the “inside outside split” we introduced a couple weeks ago. Simply put, not captured by “whole OL/DL pressure type stats”, we take it a step further and identify strong/weak pass pro vs opposing pass rush splits by interior vs outside. *Think similar to a defense that’s ranked 5th against the pass, yet is 30th vs the deep ball/1st in the short areas playing a team that takes a bunch of deep shots. And the Chargers are far more productive in outside pass rush, with the Patriots protecting better on the inside (according to SIS Points Added metric). This all leads me to believe that the Chargers pass rush will get to the young QB, Mac Jones a couple times this game.

*Looking at the PFF Rankings it shapes out like this:

There is just too much offense in this game to ignore, but based on some variables like Mac Jones, a Rookie QB in only his 3rd Road NFL game, going against a strong pass rush that has a tactical split advantage, we want “an over”, but with the more likely team to win outright.

This is a bit of an unusual play for us, but the model is pointing this way strongly, especially past the critical 14 point barrier.

I’ll admit, MUCH of this play has to do with the fact Tyrod Taylor is coming back from injury. According to the SIS Datahub ON/OFF Report, he brought an eye-opening .25 PE/Play more when on the field, than not,  to his team. Knowing this, and knowing many of the Texans offensive performance stats are skewed by his absence makes it hard to believe they are 2-touchdown plus home dog.

Additionally, the Rams are coming off a come-from-behind win over the hapless Lions, where Detroit at least showed potential Ram’s opponents how to stay competitive. I believe the coaching saw this and will take advantage. All of this is happening while there may be some subjective advantage for Taylor and the Texans given the whole “DeShaun Watson backdrop”. Given the latest news, he may be even more motivated to show that he is “just as good” (in his mind) as Watson.