*Reminder: “Breakeven %” equates to, informally, how confident/probable you would need to be to bet that side, and get a fair/even bet (i.e. it helps bettors understand the pricing/payout/odds all at the same time).
**That extra 2.4 percentage points is the price you pay for a fair ATS bet

This is a matchup vs two teams that come in with strong offenses and weak defenses. The Cowboys come in to the game 0-1, but covered vs the Super Champ Bucs. The Chargers are coming off a comeback victory over a Fitzpatrick-left-the-game Washington club. Here is how the teams stack-up after one week of performances, based on Football Outsiders DVOA rankings:

Neither team comes in with a strong “Coaching Advantage” as Sharp Football Preseason Guide ranked the Cowboys Mike McCarthy 19th, and Brandon Staley 24th. However, it’s fair to see that McCarthy’s “needle” is likely pointing downward (regardless how many times he lies about learning analytics) and Staley is clearly has a brighter future in the league.

Zooming out, focusing on the process when betting on the NFL early, it’s important to properly weight last season’s information, solidifying priors and ensuring we don’t overreact to week one data. With that said, here’s how each side shapes out from a matchup perspective:

When the Chargers have the ball (DAL Defense) 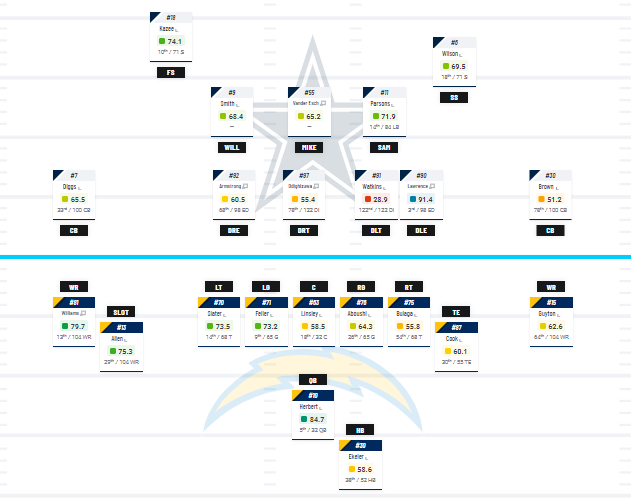 *Chart thanks to our friends at PFF.

The Chargers took a note from AFC West partner Chiefs, and addressed their biggest weakness in the offseason: O-LINE. It’s very possible they finish the NFL season with the most improved OL play in the NFL. Yet any conversation about the Chargers needs to start with QB Herbert. Herbert’s play in 2020 although strong, is very likely his “peak”, as much of it was propped up by success on 3rd downs/under pressure, datapoints that are highly volatile from year-to-year. Yes, some smart people will point to the jump QBs typically take from year 1 to year 2, however, its important to keep in mind those “jumps” are usually a QB going from “bad” to “average”. Not good to great.

On the flip side, Dallas comes in with their Nickel, Single-High Safety, Cover 3 defense. Beyond bad last year by most performance indicators, and not getting much better in the offseason, they have consistently struggled against WR Screens. In the last 2 years giving up 6.5 yards per WR screen. Given the Chargers have performed exceptional on WR Screens (30.3 DVOA), this tactic may make the Cowboy defense perform even worse than expected.

When the Cowboys have the ball (LAC Defense) 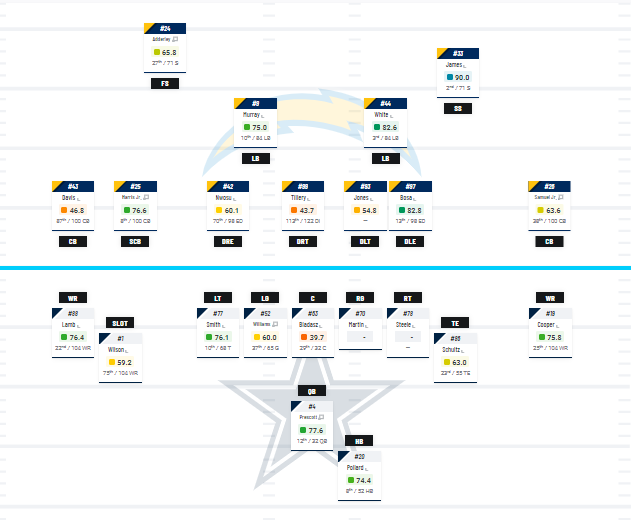 *Chart thanks to our friends at PFF.

The Cowboys offense comes into the 2020 season absolutely loaded with talent. And it’s their hope that if they can stay healthy (at least more than in 2020), this is the side of the ball that will carry them into the playoffs. Last year their offense, schematically was known for a couple things: Pace (2nd fastest Neutral Pace), and the famous McCarthy Curl Route (199 of them last season #1 in the league). Regardless, the metrics that stood out in last week’s game vs the Bucs was Dak’s #2 ranked Time to Throw (getting the ball out quickly/negating pass rush) and an 8th ranked CPOE (how accurate the QB is despite the ease/difficulty of the throw) according to NFL Next Gen Stats.

On the other side of the ball, the Chargers are a very interesting subject of debate this offseason. I wish I had more time to go into detail, but I think it can be best summed up this way:

All of this leads the Staley and the Chargers into choosing one of two directions: Change a successful scheme to fit into players strengths or force a good scheme onto players not equipped to run it. It will be interesting to see how it plays out this season.

Additionally, given how many passes will likely be tossed around in this game, 1-2 turnovers may be the deciding factor. When looking at NFL Next Gen Stats for Week 1, although the Chargers offense had the 28th ranked Expected Completion rate (how open are WRs getting schemed), Herbert had the 5th highest aggression rank (throws into tight windows), which is typically an indicator of interceptions to come down the road.

The Chargers just are not ready for this Cowboy Offense, I see Dallas winning this outright.